The mimosa tree spread its roots, finger-like, over the northwest quadrant of our front yard, bordered by razor-trimmed boxwood hedges and flanked to the east by my father’s prized hydrangeas, the soil beneath them carefully monitored for the proper acid content, their blossoms leeching color from green to gray to clouds of periwinkle blue. The picket fence propping them up was joined to the house by an arbor, canopied by heirloom rose climbers that reached across the garden path and offered scented shade. I spent my summers reading among the branches of the mimosa and, each spring, I marked the days until summer vacation by the number of blossoms left upon the tree.

I could see Rosensteel Avenue dead-end into Rock Creek Park from my seat among the first tier of branches. The street became a path leading straight down to the winding creek, guiding all the neighborhood kids deep into the woods. In summertime, we waded through the stream, sometimes chest-deep, National Geographic explorers discovering dark Amazonian tributaries. In winter, we ran pell-mell down the street where the hill dropped off just past our house. Gripping our snow saucers tightly to our parkas, we belly-flopped onto the beginning of the path and skittered wildly among the trees, bouncing from trunk to trunk, landing with a thunk and a crunch on the frozen stream. If you hit the path with just the right amount of momentum, your first collision would be with the giant oak, fifty feet into the woods. A bounce off that tree sent you flying over the water and down the slope towards the school crossing bridge. Once, on an exceptionally bright and snowy day, Cathy Lawlor cut school and slid halfway across the bridge on her first run. By tough luck, she forgot about the kindergartners walking home through the woods at noon. The school patrols on the bridge whooped her on but were obligated to report her.

Cathy and her sister Lisa lived at the top of Rosensteel Avenue, just one house from the corner. I could barely see Lisa’s bedroom window from my perch in the tree. Each day, when she finished her homework, Lisa would tie a red bandanna to the window sash and signal me to rescue her from Cathy’s taunting. Lisa’s mom was divorced and worked two jobs, leaving the older brother, Andrew (known as Buzz), to oversee homework. All the kids in the neighborhood held Buzz in high esteem. The first boy in the county to run a five-minute mile in high school track, Buzz stood patrol over his sisters, usually releasing Lisa to my custody. He hoped I’d put in a good word with my sister Pam, who had yet to say yes to his request for a date.

Pam looked out for me, and my sister Sherry, much like Buzz did for Lisa and Cathy. Rather than standing over us as we did our spellings and sums, Pam counted on us to get good grades. We studied hard for her. She never seemed to mind when I would plunge into the woods with Lisa in the late afternoon. We built dams across the water and searched for secret messages we had hidden in leafy bowers months before.

During the spring of 1963, in May, the month of my eighth birthday, the mimosa blossoms burst forth in concert, heralding the closeness of summer with aromatic notes. Evenings after dinner, my father would come and stand beneath me as I read in my tree, his breaths deep, his speech low, his pauses long. Dad talked about his job as an economist for the Department of Labor, describing his traffic-congested commute down to Constitution Avenue. He found irony in the museums and national monuments, crowded with tourists and schoolchildren. Did they wonder about the majestic buildings saluting the Capitol from either side of the National Mall where he and thousands of other civil servants toiled in office cubicles?

Perhaps this summer, he would say, Pam would bring Sherry and me to his office. We would search him out among the miles of seemingly endless corridors and lunch in some congressional watering hole. Or we could hike across the mall, scale the steps to the Museum of Natural History and pass beneath the trunk of the great elephant on our way to the basement cafeteria. We’d jostle for a place in line among the tourists and government workers and fill our trays with composed gelatin salads, grated carrots, and canned grapes embalmed in their jiggling mass. Following lunch, we could explore the Smithsonian, crisscrossing the mall from the old castle to the National Archives, ending our journey at the foot of the Washington Monument. The shadow of the great obelisk would shelter us as we dangled our toes in the reflecting pool and craned our necks for a glimpse of the Potomac River to the west. Late in the afternoon, we’d return home. Pam, weary from pleasing us, would escape to her room. Sherry and I would take refuge in the shade of the garden to await Dad’s return from the city.

But that summer, Pam’s last summer in high school, she joined Dad in his commute to the city. A family friend found Pam a secretarial position. She and dad carpooled down Connecticut Avenue, where he would drop her off and cut across Dupont Circle toward the Federal Triangle. Pam would read The Washington Post aloud as they zigzagged through traffic. Dad turned the daily commute into lessons in social responsibility for Pam. She would register to vote the following spring, and Dad believed an informed citizen was a productive citizen. In the evenings, standing beneath my tree, he continued his lessons with me. As I gazed out over the neighborhood, my father gazed out upon the world.

The Cuban Missile Crisis from the previous October pushed the Cold War into the mainstream of American consciousness. In the spring of 1963, novelist John Le Carre published The Spy Who Came in from the Cold, which quickly found its way atop the reading pile on my father’s bedside table. Towards summer, our government struggled to negotiate test ban treaties with the Soviet Union, and our national pride grated from the successful launch into orbit of the first female cosmonaut on June 16. In the summer of 1963, the headlines resonated with civil unrest. Klansmen shot Medgar Evers in his front yard. Martin Luther King and the Southern Christian Leadership Conference gathered momentum for the freedom march on Washington that was to take place in August.

My sister Pam moved closer to maturity each day, drawn outward toward the world beyond our boxwood hedges. Her rush hour conversations with Dad continued at dinner as they discussed the importance of the civil rights legislation being batted about in committee at the Capitol. But Pam would quit her summer job before the Freedom March on August 28, and Dad observed, alone, as the civil rights advocates and protestors poured into the city. Church buses from Alabama and Mississippi lumbered down the narrow one-way streets. Schools and assembly halls became campgrounds for Christian youth groups. The minister at our church, Woodside Methodist, borrowed portable fans, cots, and bedding from the congregation. Sherry’s scout troop collected care packages, waxy brown paper sacks stuffed with toilet tissue, toothpaste, and Ivory soap. Mom cooked casseroles for potluck suppers hosted by the church ladies’ league. Our dinner table discussions, my father’s eloquent twilight defenses against employment discrimination, would pale once the newspaper headlines played out. More people than we envisioned, two hundred thousand strong, marched for freedom and roared, “Yes!” to Martin Luther King’s dream of brotherhood and equality.

By late August, savoring the memory of scented blossoms long fallen, I watched the pale fern-like leaves of the mimosa tree curl inward, parched from summer’s drought, dropping as I mounted my seat and sent shivers down the branches of the tree. Seedpods, bleached and brittle, scattered on the ground below. My sister Sherry placed a husk to her lips, blowing warm breath. The papery walls of the pod expanded; the seeds rattled. A high, hopeful note curled up into the afternoon air, in counterpoint to the sound of twigs and leaves crunching and rustling beneath her feet. I imagined summer’s other debris scattered over the mall in Washington, D.C.: tent cities quickly dismantled, poster boards discarded, speeches and marchers and dreams moving on to the next assembly, the next call to brother and sisterhood. I looked out over the neighborhood. I saw the world. 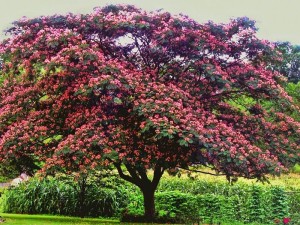 Here’s a little beginning-of-the-week humor: at one of the oldest continuously operating mobile-home/RV parks in the area, Parakeet Park has amused locals since the early 1950s by maintaining a tradition of clever, corny, sometimes groan-worthy observations on their “reader board” at the entrance to the park. I look forward to seeing the latest message when I drive up Scenic Highway 17 along the southern end of Lake Wales Ridge.
Today’s message: “Cupcakes are muffins that believe in miracles!”
My favorite saying from several years ago: “Nothing is truly lost until your mother can’t find it!”
I have attached a picture of the park in the early 1950s as well as a picture of a “groaner” that they posted in 2015.

And finally, if you are ever in South Polk County at the end of January, check out their annual rummage sale event when cars line the two-lane highway. You never know if the crowds are drawn more by the goods on sale or the legendary apple dumplings.
Life in the slow lane.
Happy Monday!